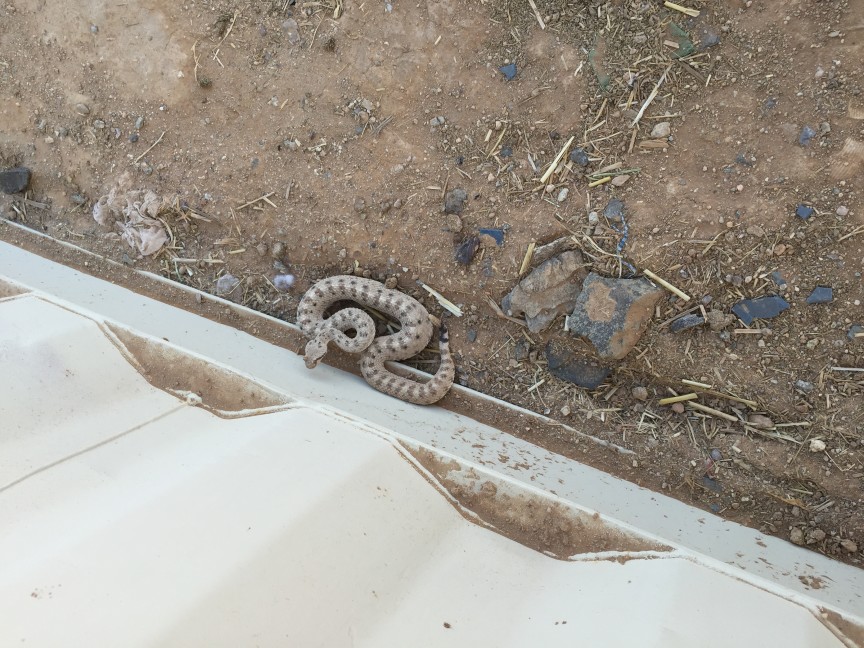 So. The dogs kept barking and, unlike my better half (or 3/4 some days), I don’t know the difference between “stray human” and “stray snake” bark, and I was busy in Bertha (shipping container) and just shouted for them to hush. Several times over the last two hours. Traipsed indoors, then back out to begin hanging laundry on the line, and happened to glance over at the youngest dog (best watchdog ever): he was keenly watching the ground right at the corner of the doghouse. And barking sharp, not heeding my hushes. So okay. I don’t know the barks apart, but I know visual cues. Dropped laundry just shy of outright sand, headed for the dog pen: sure enough, a young sidewinder was trying to come out from under the doghouse.

So. Here are the new things I now know about sidewinders: they are capable of climbing obstacles more than half again their length: in this case, nine inches tall, which well exceeds the ‘protective edging’ we have placed around the dog pen. And the chicken pen. And the goat pen. They are also even more peaceable than I ever guessed and quite fast under some circumstances (this is the fastest I’ve ever seen one move). And they are extremely good neighbors, kindhearted to a fault, solely interested in dealing with the rodent population here and having a sip of water from a low-lying basin once in a great while and lying in the shade when the sun’s hot and in the sun when it’s not, and not at all wishing to tangle in another person’s business. Would god all humans—including my own self—were a tad more thus. There would be less war. And hunger. And everything not good.

And here is the new thing I know about myself: my heart didn’t even skip a beat or move the slightest bit faster throughout. First time ever. It’s been many a year since I’ve been afraid of snakes, but my instinctive response before today has been to see them with a pounding heart. Today? Nope. Heart pounding no more than it would for a fly or a beetle or a cow chewing a cud. hannah has finally grown one more neighborly cell where these denizens of the desert are concerned. But she shall in general wear shoes to Bertha from now on, too. And she shall now go on with Tuesday. But she wishes you such genial encounters today, too.