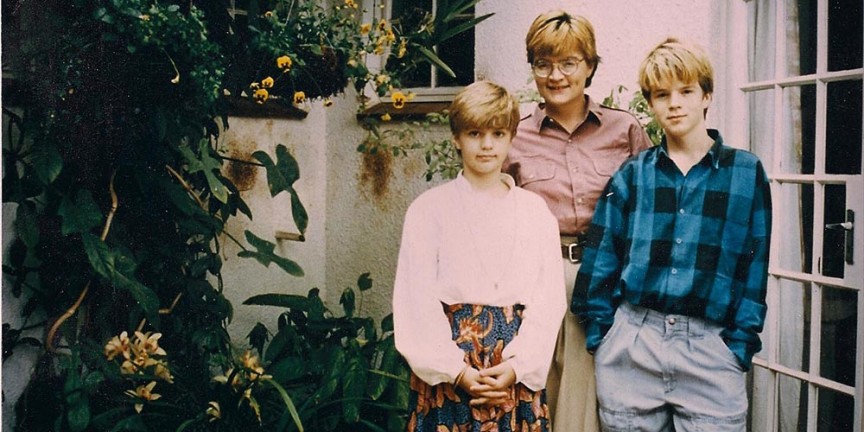 Forty years ago, silenced for months and not allowed to defend myself against the accusations of a stranger or even be heard, I took my first real beating from a man I loved dearly for something I did not do. Stunned, barely able to breathe and unable to speak but numb to my core at the unfairness of it all, I blacked out and remember little of the aftermath. When I came to, what little light there had been in humanity for me before was extinguished. I crept through the next two years in a sad, quiet daze until I stumbled on a chance to make a family of my own and got up the gumption to try it.

Thirty-eight years ago, I took another beating from another man (my new husband, whom I also loved as well as I knew how) and then too many more to count from him for more than six years until I managed to escape with my two children. That we three are alive today is a testament to the help of many people, most of them rank strangers in our first, crisis-impelled meetings: people who work to make family violence a thing of all our pasts. It is for them and for all the millions of people who are now having to survive intimate violence that I write and continue to speak about this personal and shameful matter.

Tomorrow Snap Judgment will air the latest interview I have done with a journalist about surviving domestic violence, stalking, and having my children abducted by a man who harmed both them and me (Episode #601 | The Path, segment titled “Hunted”). I know that story-wearied moderns will hear this next line as a cliche, but still must say it: If what happened to us can reach even one more person and provide hope and a promise that they, too, can survive, then all the shame of sharing such traumas will be worth it. Something good will have been wrought from all that has been so broken for me personally. That’s how this reality can work for survivors: nothing fixes anything, but we learn to navigate and walk onward anyway, and sometimes, if we are lucky, we get to help somebody else. I am grateful to Anna Sussman for finding Point Last Seen and coming to the desert to find a way to tell the story again for a new audience: as I mentioned in an earlier blog entry, neither the field interviews nor the editing can have been much fun, but Anna took it on with verve and skill.

There is no pretty way to talk about violence that is personal, intimate, familial, domestic—no way to make it palatable for listeners or the soul wielding the pen. There is no comfortable story that makes battering and child abuse a feel-good tale from which we can all then arise, powerful, undiminished, and entertained together. But there is also no single act that makes domestic violence more likely or more vicious than remaining silent once you have entered its domain. So here are some things I have learned about the violence within.

Only two men have ever laid a hand on me in anger. Both, I believed then and remain convinced of to this day, were good in their hearts. Troubled in their souls and spirits and even bodies, yes, but good in their hearts. Sensitive, yearning, they wanted to do what was right, but neither knew where to put the rage of the world. Hitting me wasn’t about me ever, I finally learned, but only long after the fact. It wasn’t about what I had said or not said, done or not done, thought or not thought; it wasn’t about what I might or might not do/think/feel: it wasn’t about the gossipy old aunt who got it into her head that some employer in town was having sex with all the young women working for him so I must also be doing it (even though she barely knew me) and would surely get pregnant and shame the family for all eternity so must be punished and stopped (at a point, mind you, when I didn’t even know what sex was, nor had the thought entered my focused-way-elsewhere mind); it wasn’t about me forgetting to put a butter knife on the dinner table or remembering to put the correct number of ice cubes in a glass at a picnic; it wasn’t about me looking as if I might be thinking something that wasn’t agreeable to someone else; it wasn’t about my waist size or my IQ or my personal quirks or even my falling asleep during The Tonight Show monologue (and waking to be hit with a glass thrown at me that shattered when it hit and severed all the tendons in my right wrist): no, the beatings were never about any of that, I finally understood many years later (by having tried to address every possible thing that could cause them in my behavior and yet still failing). Only leaving stopped the physical abuse. And then came, for me, the true horror.

I protected my children in the marriage—at times by putting my own body directly on the line—and, while I was there, in what I always took to be a sign of the true goodness within, their father did not cross that line. He beat me instead. The final beating was so severe, however, that I finally understood as I was losing consciousness that now there would be no one to protect them from his anger. When I came to, I vowed to myself that I would get my son and daughter and myself out of that house if I lived. He had always threatened to kill us all if I ever left him (each of the children first and then me), and had practiced the moves and weapons he would use for entertainment. Long before I ever thought of leaving, he did this. Leaving was not a good plan. I determined to do it anyway and took the very first chance.

We escaped on a fluke and, with the aid of a stranger, traveled westward until we found a small community with resources for battered women. There could have been a happy ending eventually, but three (male) judges in three different states opted to allow my ex unsupervised time with them over the next eight years—all for the purposes of keeping the children in the ‘family home’ and preserving and/or repairing the ‘biological tie’—and members of a church helped to hide them the second time they were abducted. There are no words for what a mother feels when her children are being harmed and she cannot get there to stand in between. None.

And this brings me to the harder truths, the ones that ultimately caused much more harm than any mere beating could ever do. The men who intervened in ways that ensured that my first husband could abuse my children, I am convinced, had good hearts. I cannot believe that any of them intended to harm my daughter and son. They each were operating from a place of authority, not malevolence: faced with a ‘disorderly’ family, they were going to ‘fix’ it. Believing the danger unreal or only targeted at one person (me), each of them ruled that my children’s father have unsupervised control of them as if the ‘family’ were an intellectual construct that could be made real because it was a good idea, as if a biological tie discounts any reality, as if violence can be constrained without accountability: and each one of these well-meaning judges ensured that, due to their decisions, my children would be abused. These are some of the realities that survivors of family violence face daily, often alone.

Our systems are much better now than they were 20 and 30 years ago, yes, but notions of the biological family and of spousal abuse being irrelevant in child custody remain entrenched, and institutions that should provide refuge (families, churches, law enforcement, the courts) too often still do the opposite in the name of keeping the family intact. Good hearts and high ideals, it seems, in a paradox older than time, sometimes work against people even when they are doing their best. Only community—coming together in unconditional compassion with a firm resolve to build safe spaces for all, working together on ourselves and our struggles, refusing utterly to leave anyone outside of our midst—can bring us closer to goodness not just in hearts but afoot. Only community can help survivors to heal and become our teachers. Only community: which means, only us. All in. Until.

If you are surviving domestic violence—or know of someone who is—there are a multitude of resources available via the National Domestic Violence Hotline (see Resources page on this blog). Although the Hotline did not exist until 1996 (it came about as part of the Violence Against Women Act), my children and I were aided by efforts preceding these. You will have to be strong, yes, but there are tens of thousands of people who work to keep survivors surviving, and they are also working to help those who are trapped in being abusive find a way to break the cycle. I am grateful for us all. Every last one, no exceptions.