Although I’ve been writing since the week I turned five, I had no intention of publishing before the opportunity arose in the early 1990s. That all changed when a short story I wrote won a small prize at Scripps College and an editor contacted me about writing a book on tracking. It took years for me to follow up on that and finish the manuscript for Point Last Seen, but I remain humbled by its reception and so grateful to be able to continue to write for publication. Below is a selection of my books.

In the desert your terror passes for courage, reassuring everyone but yourself, and somehow, in the midst of all that certainty, you realize that you are surviving.Point Last Seen

My first book, Point Last Seen: A Woman Tracker’s Story was published by Beacon Press in 1997, with multiple subsequent editions since (Penguin paperback, 1998; Audio Literature audiobook,1998; multiple foreign editions; Pocket/Simon & Schuster (Gallery reprint), 2002), was made into a CBS movie of the same title, starring Linda Hamilton, in 1998. My goal here was to tell two interrelated sets of stories from my life—learning how to track lost people while being stalked by an abusive ex-husband—in ways that would allow readers to experience how a tracker moves alongside a trail and processes the signs and meanings found there. Pacing, timing, and segmentation were all deeply deliberate, as were the disparate threads of observation and feeling, for tracking–and violence–never happen straightforward or only in one direction. Like life, both come at us will-nilly. We learn to come alongside a set of tracks only by immersing ourselves in the whole.

For a review of the book (with my name tidily misspelled!) and an excerpt, see these archived documents from The New York Times and Kirkus Reviews. Sites like Goodreads and Amazon offer a number of reader reviews. The audiobook is still available at booksellers such as Barnes and Noble, and the film is still airing on cable, as for example at Lifetime.

Excerpts from several reviews of Point Last Seen are included to the right. Jeffery Deaver, bestselling author of The Bone Collector, wrote, “More than a memoir, more than one woman’s story of survival, Point Last Seen is both a harrowing thriller and a riveting look into the fascinating world of tracking. Nyala proves herself to be one of our most compelling outdoor writers, though, like Norman Maclean, she soars above the genre and gives us poetry. This book is magic!”

You can read more reviews here. If you or someone you know is surviving domestic violence and need help, please see the Resources page for links to the national hotline and websites.

Odelle Bowman and Dawn McAndrews have recently used excerpts from PLS, this blog, and interviews with me to turn this story into a play, as well, and will be touring with it in coming years.

In the sequel that I’m now finishing (untitled at the moment), I am telling two more interrelated sets of stories—learning how to track for subsistence, community, and healing among indigenous peoples of the Kalahari, Namib, and southwestern U.S. deserts while reckoning with the structural inequalities, violence, and race- and class-based stereotypes with which these people must contend every day. The prequel to PLS, an examination of race, education, and religion in the south in the 1960s, is underway as well. 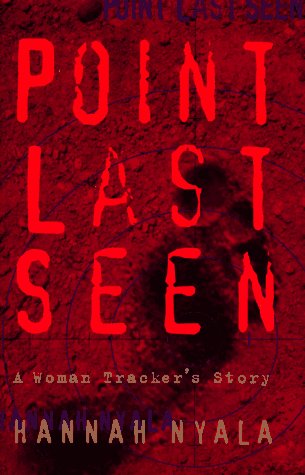 A limited number of hardcover first edition copies of Point Last Seen are available (on a sliding scale of $21 or pay-as-you-can + postage), and I am happy to sign them for you. 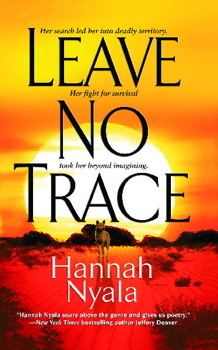 The true survivor is one who has finally learned that survival itself is beside the point. Tally Nowata, Day 39Leave No Trace

What would you do to survive, if stranded in a place for which you had no skills or knowledge and no backup? Join Tally Nowata in Leave No Trace, which Publisher’s Weekly called “one of the year’s most noteworthy suspense novels.”

Search-and-rescue is Tally’s profession–and her passion. But now she’s out of her element, half a world away from Wyoming’s Grand Tetons, stranded and alone, in Australia’s remote Tanami Desert. She’s hunting for her loved ones and trying to elude those who seek to kill them across a hostile landscape for which she is not prepared. A suspense-charged novel of courage and hope, Leave No Trace will leave you breathless. And thirsty.

Leave No Trace, the first novel of the Tally Nowata series I began at Pocket, was published in 2002 and has recently been made into a independent feature film titled Heatstroke (Bold Films; Evelyn Maude Purcell, director). Reader reviews for the novel can be found at Amazon and Goodreads, and an excerpt can be found at Simon and Schuster. The book made the Unforgettables List on Goodreads as well.

“ONE OF THE YEAR’S MOST NOTEWORTHY SUSPENSE NOVELS. . . . Rarely does a writer make the transition from nonfiction to fiction as seamlessly. . . . So believable, it’s easy to forget this is fiction.” —Publisher’s Weekly

“Intensely gripping suspense. . . . This is a read to be savored.” —thebestreviews.com

“Tense and totally involving, Leave No Trace reads like a true story. Tally’s adventure is so perilous, the dangers so skillfully depicted, it’s as if we’re living them with her. This is a one-of-a-kind reading experience.” —Romantic Times

“One of those rare books that . . . combines pulse-pounding suspense with profound revelations. . . . Filled with courage and hope, along with the details of survival, this breathless journey into the heart and soul of a woman and her companion is a joy from beginning to end.” —newmysteryreader.com

“Leave No Trace is an exciting survivalist adventure . . . with a plot that never slows down. . . . Tally is a great protagonist. . . . Fans of action thrillers will want to read Hannah Nyala’s thrilling tale.” —bookbrowser.com 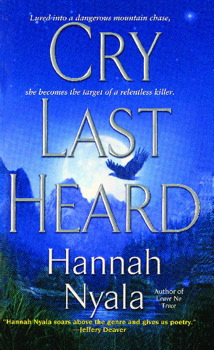 Shut down by the grief of losing the man she loved, Tally Nowata has come home to pursue the search-and-rescue work that is her passion. When a crank phone call leads Tally and a friend to the top of a treacherous peak, it is the start of a violent game that will force Tally not only to the heights of danger in Wyoming’s Grand Tetons, but to the brink of sanity in a race to the death. The lethal predator who nearly destroyed her in a scorching desert standoff has found her again. He’s dead set on revenge—and this time he’s targeted the one thing Tally can’t survive without: her child.

Cry Last Heard (Pocket, 2004) is out as well, with reader reviews available at Amazon and Goodreads, and I’m working on the third book now.

Eyes closed, Nowata, get a grip. The fall inside your head is the one that kills you first.Cry Last Heard

It has been two years since Tally Nowata returned from Australia to the Grand Tetons in Wyoming with a baby, but without her beloved Paul who died in the desert at the hands of Earl J. Foy. Tally works as an expert search and tracker ranger.

In a blinding storm, Tally and her partner Laney “Lanes” Greer goes to rescue a climber, but when they reach their objective no one is there. They continue to search the mountain, but someone hunts them. Lanes is wounded and unconscious so an injured Tally rushes to get them help. New rangers arrive, but Lanes is missing, but they do find the body of Lanes ex boyfriend who Tally detests. The Sheriff believes Tally killed this victim and Lanes. Tally knows otherwise and plans to prove so once she finds her missing partner only to find her enemy has someone else ever dearer to her to hold as hostage to her behavior.

The heroine is a courageous person who acts like a mountain lioness protecting her cubs as she goes single-handedly to rescue her child. The beauty of this National Park is so visibly described that the audience will feel they are climbing the peaks. Though an action thriller, CRY LAST HEARD enables the audience to get inside the minds of several key players including the star so that readers learn motives and see what is going on through each main character. Hannah Nyala’s latest thriller is keep shelf material to be reread for the pleasure of a fine tale.

At Sea in the World (Or, The UnNatural Histories of a Ship):

After a good many years at the effort, I finally completed my doctoral dissertation in 2012, using the ethnographic and environmental intercourses made possible by this fascinating little globe-trotting ship as a window into the history of the early Americas and U.S. in the world. The story is too rich to leave it sitting between the covers of a tome somewhere, of no use to anyone, so I have pulled anchor on my regular haunts and am headed for blue water on this one: using historical scholarship as a keel for a new ship entirely, a story that brings the people of this frigate to the stage once more. For a sense of the scope of the project (yet nothing whatsoever akin to the voices in which the manuscript is now taking form), here’s the (rather boring!) blurb from the dissertation:

In Oa’oamanu (October), 1798, the Teii people of Taioha’e, Nukuhiva held a great koika (feast) for kin and foes alike at their ceremonial center on the island’s northern coast. An estimated 10,000 Henua’enanans converged for this multi-day ceremony, which included singing, competitive dancing, and historical re-enactments of recent disturbing encounters between Te ‘Enana (The People) and Te Aoe (The Strangers). On the 23rd day of that same month, a group of people from Salem and Essex County, Massachusetts held a town meeting where they “voted unanimously to build a frigate of thirty-two guns, and to loan the same to the government.”

Frigate Essex became the first U.S. vessel of war to round and double the Cape of Good Hope (1800). In 1812, she served in the Caribbean and Atlantic, taking the first British prize of that conflict (H.M. Alert), and, early in 1813, became the first U.S. ship of war to round Cape Horn and cruise the Pacific. Within months, the frigate had captured 12 British whalers and the focused attention of the Royal Navy, and was in serious need of repairs. Fifteen years and three days after that initial Salem vote, U.S. Frigate Essex opened the bay off Taioha’e, igniting a small chain of controversial, deadly, and oft-retold events that included some deeply intimate intercourses, a “war of conquest,” and a formal ceremony of annexation to the United States. After a bloody battle off Valparaíso, Chile in March 1814, the well-storied vessel survived to spend many of her remaining years in the Royal Navy as Convict Hulk Essex.

This thesis treats the ship as the main historical character and tracks her from inception to demise, attending in particular to the ethnographic and environmental interrogations necessary to keep the frigate afloat and functioning. Cross-species encounters and cross-cultural intercourses become the lifeblood of the living ship, and shape the daily realities of those aboard and alongside. By reflecting on the conventions of historical narratives and performances throughout, immersing readers in the primary sources of this project, and developing a concept of cultures as waves becoming, the analysis seeks to function as a koika that reconsiders what U.S. Frigate Essex might still teach us about ships and nations and beings at sea in the world.

I keep multiple irons in the fire on any given day, working in creative nonfiction, oral history and ethnography, and fiction (multiple sub-genres), but I’ve learned that the better part of valor is to not talk much about projects until they are well and thoroughly on their feet. I’ll update this section for any that are published or forthcoming under Hannah Nyala or Hannah Nyala West. My main projects at present are the bookends to Point Last Seen: I am close to finishing the sequel, which focuses on subsistence-oriented tracking in the Namib and Kalahari Deserts, and will follow that with a personal history of race, education, and religion in 1960s Mississippi.